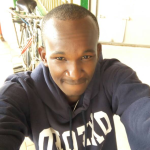 Sweating profusely I tried to wipe my brow to no avail. Today the sun seemed to be a bit closer to earth, and it was scorching our bald heads. The land was barren, and the mirage continued its peculiar dance. The chains on our hands and legs were heavy and hot. Mopping my brow for the umpteenth time, I suddenly realised that it was probably the last time I would be using my hands as a pair. My mind raced back to all the things I’d ever done with my hands both good and bad. I thought where I had been and what I had done, the souls I’d touched and the ones I’d destroyed. A terrifying scream startled me jolting me out of my deep reverie.

I was now alive at the moment. I could feel my breath, I could smell the strange odor of feces, urine and sweat mixed with blood. The stench was choking me. The crowd cheered loudly as the butcher pumped up his axe in the air while doing a celebratory jig.  The crowd was baying for blood, a look at their faces and you could see they were relishing everything that was going on. I was left wondering what kind of frenzy they would be in once the beheading started.

Up in the very important box you could see Mulei and Maria his wife and their entourage were enjoying the scene. My heart was now beating loudly like the tum tum drums of South Africa threatening to bust out of my chest. I felt like I could die. I swallowed hard as next guy in line was unchained and escorted by two humongous men to axe man’s arena despite the struggle he put up his hands were held firmly on the blood soaked log.

Meanwhile, the axe man was revving the crowd up with a small performance with his massive blood stained axe. With a wry smile on his face the king gave the signal and in a fraction of a second the axe was on the prisoners’ hand, cracking his bones while splashing blood all over. Simultaneously, the prisoners’ screams of pain were silenced by the rapturous applause of the crowd.

Next in line was an old man, and I was after him. His chains were undone. He walked slowly with a determined step and knelt before the axe man. Suddenly king Mulei stood up and with a wave of his hand the crowd went silent, but my heart thundered on, for a moment I thought the other prisoners could hear it.

“Citizens of Tuaa, your king greets you, today we have to appease our gods” Bokonos’ voice broke the hot afternoon air and reverberated around the Amphitheatre.

The crowd roared and clapped with excitement.

“Today thieves’ hands will be chopped off so that they will never steal again” he continued and the crowd burst into another rapturous applause.

Looking around, I could see the last prisoner’s on the ground, and it was still twitching.

“This man’s hands will be chopped off for trying to grope the queen, he deserves to die but being a merciful king I will let him live but with a warning.”

Another loud cheer met his last word. A broad smile crept from cheek to cheek on the queen’s face as she clapped to the words of the king. With a wave of his hand, the crowd fell silent again and that eerie feeling that my heartbeat could be heard returned. Suddenly the old man’s voice broke the silence.

I was taken aback, and so was everybody else in attendance. The king Mulei trying to show who is in command retorted “so be it you fool”

The crowd went ballistic again. The old man with a determined face scanned the crowd, the king and then bowed. The axe man was now doing his pre-beheading jig and both he and the crowd were loving it. King Mulei watched with a wry smile plastered on his face. This stupid old man had disrupted his plans but the show had to go on. Mulei let the axe man dance for a while, a tactic he used to fill the crowd with anticipation. Then he finally gave the signal and with one clean swing the axe landed on the old man’s neck which dissociated from his body. It rolled on the floor spilling blood until it rested near the pair of hands that were still twitching.

The crowd was ecstatic. Warm blood that had splashed on me was now trickling down my face and bare chest. The old man’s head lay in a pool of blood with flies swarming all over for a taste of fresh blood. The scene was ghastly I nearly vomited, but I managed to keep myself together. I was next and this sent cold chills down my spine, my feet were like wobbly like jelly. As the old man’s headless body was being dragged away I observed that the queen relished every moment of this.

Suddenly a large bust of wind tore up the Amphitheatre and black clouds engulfed the blue sky. It started getting dark. Everybody was both surprised and confused, you could see it on their faces. The place fell silent that you could hear a pin drop. In a jiffy the old man’s head started floating, and his eyes turned pure white. Everybody was shocked, some fainted and others got on their heels and fled, the courageous ones were left behind to witness this peculiar event. The head was now midair spinning around slowly occasionally throwing bits of clotted blood.

“Today we will witness the end of Mulei’s reign” his shrill voice was deafening.

The guards had dropped their spears and scampered away. The old man’s head swirled around for a while, finally settling on me. His white eyes elicited no emotion, I stood there too afraid to move, my feet were heavy, and I had no energy.

“You are our saviour, the head said.

In an instant the twitching hand came alive. It felt its way, took the keys that had been dropped by the guards. The hand unlocked my hands as well as the other prisoners who were still shell shocked but they immediately took to their heels. I tried to follow them but I couldn’t Some magnetic force kept me rooted on the spot. Pandemonium broke out as soon as the head and hand fell down and a lightning bolt hit the very important person’s box.

I could see the king Mulei, his wife and their entourage trying to escape. What happened next still baffles me to date. I was struck by lightning on the top of my scalp, but I felt no pain. Instead, I experienced the old man’s pain. I could clearly see what he had been through. His family had been tortured and killed by Mulei’s men. Then I was taken back to the memory of the incident that had caused his suffering and death. He was the king’s cup bearer. As he was serving the queen her wine, he accidentally spilled some on her chest. In the process of trying to wipe some of it off with a cloth, the queen let out a scream, claiming that the old man was groping her.

I wasn’t in control of my body. I picked up a panga and a sword and made my way up toward the very important person’s box. I was moving with extreme pace and athleticism that it shocked me. Mulei wasn’t in the box when I got there, but I caught a glimpse of his entourage. I started to run in their direction, and soon I was upon them as they made their way to the awaiting chariot.

I could spot the king now. A sudden spur of energy filled my right arm and I flung the spear which soared through the air and hit King Mulei on his back protruding from his chest. As he fell down, I could see Marias’ inaudible screams. Suddenly I blacked out.

WhatsApp Chat is free, download and try it now here!